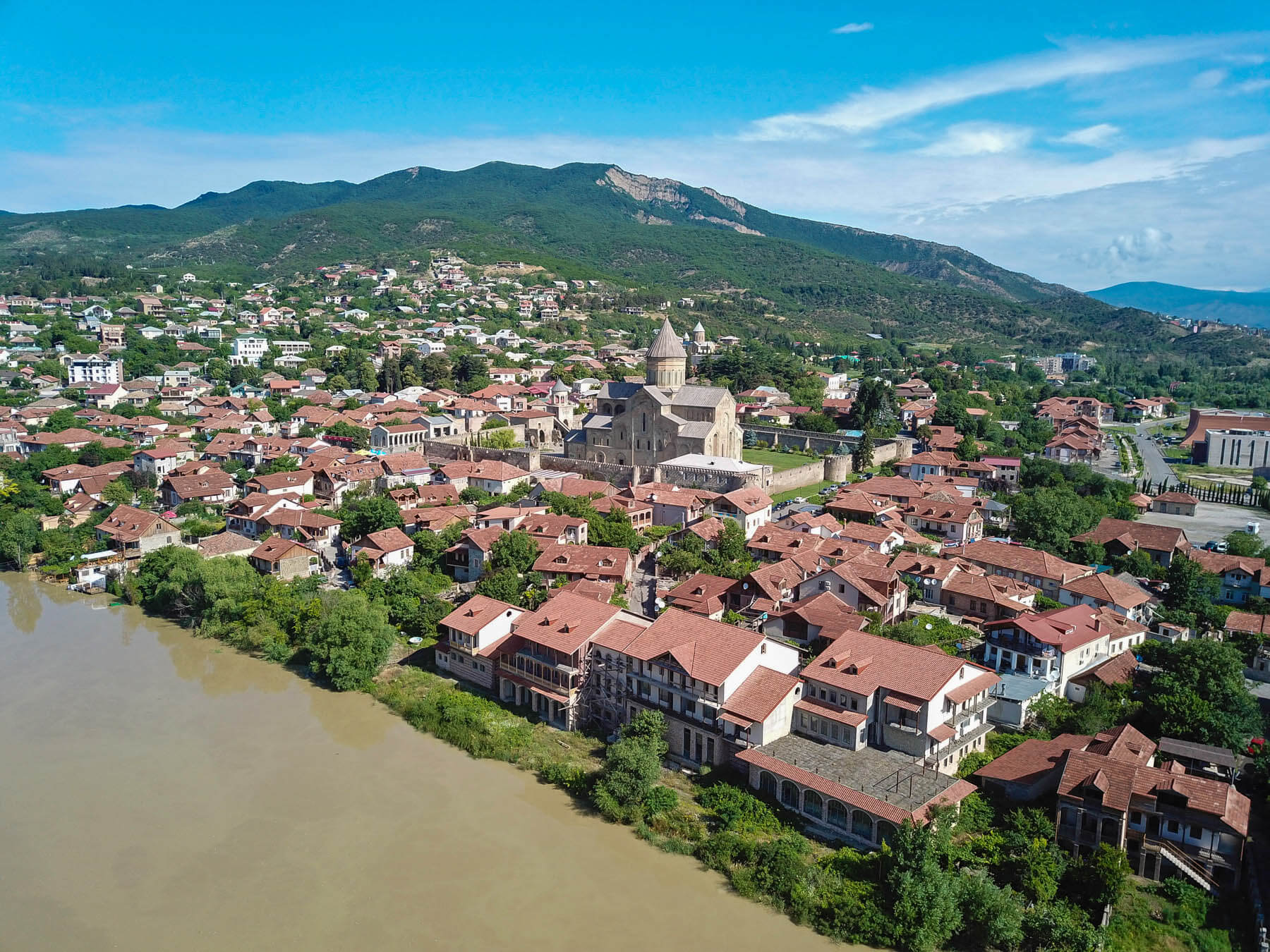 This post contains 7 short, 1-day trips from Tbilisi that can be reached in up to 2 hours (by public transportation).

Having lived in Tbilisi for nearly a year, I can definitely confirm that, along with Kyiv, this is my favorite capital in Europe.

It has a friendly atmosphere, great food options, cozy bars, plus there are so many things to do, that you could easily spend your entire trip based there, doing occasional day trips from Tbilisi.

Georgia is actually a tiny country, where you could easily visit half of it on a day excursion from Tbilisi, but this post contains the easiest, shortest day trips.

Get travel insurance for trekking in Georgia
I strongly recommend IATI Insurance as it provides coverage for a very big bunch of adventure activities.
Get an exclusive 5% discount if purchasing via this link

Day trip to Rustavi from Tbilisi

Rustavi is a city 30km south of Tbilisi, an unusual day trip from Tbilisi since I have never met any tourist who has visited it.

I came here with friends who lived in Tbilisi, and we had a great time because we were supposed to meet with a local friend who was a politician, and he showed us around, took us to have some really good wine, etc.

It is not the best place to visit in Georgia, but the center of town is beautiful, especially because all the buildings that comprise downtown were designed and built by German prisoners of WWII, so the different facades and styles are German.

Rustavi is a new city, built in 1948, aimed at being Georgia’s leading industrial center.

The number of people living in the city quickly grew as Georgians went there from the whole country, especially Svaneti.

There is a park with a ruined fortress and a few Communist things worth checking out.

How to get to Rustavi from Tbilisi

There are loads of different marshrutkas going there, including a couple of Tbilisi city buses; just go to Station Square and ask for the one going to Rustavi.

The bus will most likely leave you in the new part of town, so you need to cross a very long bridge to get into the old part, where the German facades are.

Where to stay in Rustavi

Apartment – 1home – A one-bedroom apartment with a pretty cool terrace.

Apartment – Uiut Komfort – This property has a garden view with a balcony and free WiFi.

Day trip to Mtskheta from Tbilisi

Mtskheta is a small village 20km from Tbilisi, the favorite day trip from the capital.

It is said that Mtskheta has been inhabited for 5,000 years and, 2,000 years ago, this was the center of the Pagan cult of Armazi which was a local version of Zoroastrianism, the official religion during the pre-Islamic Persian Empire.

Then, it became an important center for Christianity and, today, the Georgian Orthodox Church has declared Mtskheta the Holy City.

A few of the churches are UNESCO World Heritage sites.

It is a very touristic city, but I think the short trip is really worth it.

How to get Mtshketa from Tblisi.

They leave very frequently, all day long, and one ticket costs only 1GEL.

How to move around Mtshketa

The best way to visit all monasteries and churches is by hiring a taxi and, if you want to get the lowest price, you should book it at the tourist office, located next to Svetitskhoveli Cathedral. We booked a taxi for half-day, and I think we paid around 30GEL.

Where to Eat in Mtskheta

There are many restaurants in town but, if you want to go to a great place filled with locals, go to Salobie, located 2 or 3km outside of town, a traditional restaurant usually frequented by locals from Tbilisi (but also Russians) and which claim to serve the best lobio in Georgia, a dish that actually comes from this very same region.

I came here with my parents, and another friend who visited me in August and all of them loved it, so did I.

Things to do in Mtskheta

Where to Stay in Mtskheta

Budget Guesthouse – Guest house Ebralidze – Best location, in the middle of the Mtskheta.

Top-rated Hotel – Hotel 12 Tve – The best location, also in the middle of town, in a relatively fancy hotel.

Day trip to Gori from Tbilisi

In case you didn’t know, Stalin was Georgian.

Yes, he was born in Georgia in 1878, in an unattractive town named Gori, a small industrial city full of Soviet buildings with a very unattractive appearance.

In 1956, after Nikita Khrushchev made his speech, portraying the former leader as the cruelest of all tyrants, the thousands of Stalin statues spread all across the Soviet Union were suddenly taken down, the one in Gori being one of the few remaining – another I’ve seen was in Belarus.

The truth is that Stalin was the only reason Gori appeared on the maps and, despite Stalin’s dark past and Russian-Georgian relations, Gorians have some love and hate feelings towards the dictator.

Anyways. If you are interested in Stalin’s earlier history, want to check out an industrial city, and visit one of the three main cave cities in the country, Gori makes an excellent day trip from Tbilisi.

Interesting fact – In Georgia, there are two unrecognized republics: South Ossetia and Abkhazia. Not many people are aware that the actual border with South Ossetia is just next to Gori. You can actually see it (the army guards it) from the road itself when coming from Tbilisi and, just outside of Gori, there are many refugee camps for ethnic Georgians who were expelled from South Ossetia when it got its independence in 2008.

How to get to Gori from Tbilisi

They leave very often all day long, and one ticket costs 3 GEL. The journey takes a bit more than an hour.

Things to do in Gori

Where to Stay in Gori

Budget Hostel – Tsera House – This hostel is actually a guest house with free free private parking and a garden. Great value for money and run by a friendly and hospitable family.

Top Rated – Georgia Gold – A 4-star hotel in the center of Gori. Very spacious room with a city view.

Day trip to Uplistikhe from Tbilisi

Uplistsikhe is an extremely underrated place in Georgia.

Located very close to Gori, Uplistsikhe is what is today called a cave city that used to be an important trade center during the Silk Road times. Most travelers don’t like it because the cave and walls look too restored and fake, it is full of tourists and, basically, it can very boring.

Well, to some extent, I agree. However, Uplistsikhe is in an awesome location, on the left side of the Kura River, with stunning views of the valley and from where you get the best light for photography during sunset.

Since there is no public transportation to Gori after sunset, most tourists are gone before then, so we had the site pretty much by just ourselves and the best light.

By the way, the entrance fee to the cave is 7 GEL.

How to get to Uplistsikhe

From the bus station of Gori, take a marshrutka to Kvakhvreli, located a 20-minute ride away and only cost 1GEL.

As we left after sunset, we couldn’t find a taxi, so we hitchhiked back, which was surprisingly easy. Otherwise, a taxi shouldn’t cost you more than 10GEL.

Davit Gareja is within Kakheti province, the wine region of Georgia, but it has nothing to do with the wine sites, plus it is kind of at the beginning of the region, far away from them.

Davit Gareja is a cave monastery built and founded by monks in the 6th century, where you can see loads of frescoes that portray the good relationship those monks had with the surrounding natural environment.

The area was greatly damaged because the Soviet Army used it as a military training area, testing all sorts of weapons, many times targeting the actual complex.

This arid plain, kind of lunar landscape, has many similarities to Afghanistan, and that is why they chose to train here during the Afghanistan invasion.

How to get to Davit Gareja from Tbilisi

There is no public transportation as such, as Davit Gareja is located in the middle of nowhere, but there are 2 ways of getting there:

Day trip to Sighnaghi from Tbilisi

I have a love and hate relationship with Sighnaghi.

Sighnaghi is the most visited town in the area of Kakheti, the wine region of Georgia.

It’s an area where I spent several days and, while Sighnaghi it’s the prettiest place, a postcard-like town, in my humble opinion, it was the least interesting part, since today has become very touristic, lacking all the authentic charm other areas of Kakheti have.

Check my Kakheti travel guide to understand why.

Still, I do recognize that the town is pretty, and it makes for an excellent day excursion from Tbilisi.

Things to do in Kakheti

Check out the different viewpoints – Especially the one located here. From where you can see a panoramic view of the town, the valley, and Dagestan.
Bobde Monastery – This beautiful monastery is where St. Nino is buried, the woman that converted Georgia to Christianity. It is also a pretty cool viewpoint of the city.
Explore the town, souvenir shops, city walls, etc. – If you don’t have much to do, I recommend you go around to check the town.

Where to stay in Sighnaghi

Hostel – Sofya – Excellent location and accommodating host. Great value for money and their rooms include a shared bathroom with a shower and shared kitchen.

How to get to Sighnaghi from Tbilisi

Get travel insurance for trekking in Georgia
I strongly recommend IATI Insurance as it provides coverage for a very big bunch of adventure activities.
Get an exclusive 5% discount if purchasing via this link

Don’t forget to check our travel guide to Georgia.

As well as all our Georgia articles: