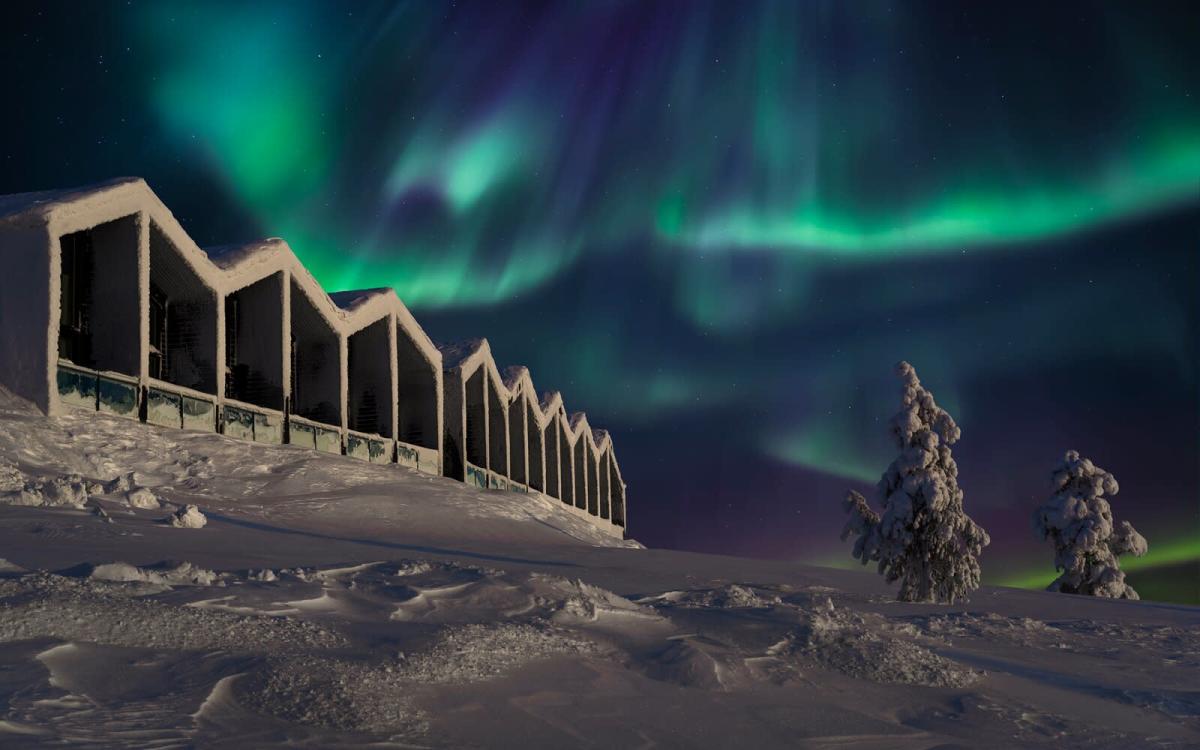 The aurora borealis, or northern lights, occurs when charged particles from the sun collide with atoms in the Earth’s atmosphere, a phenomenon that happens most frequently over the Arctic Circle.

That means that intrepid travelers hoping to catch a glimpse of this fleeting, elusive natural wonder will need to head to far-flung locales—in the dead of winter.

The northern lights are best seen from Alaska, northern Canada, southern Greenland, Iceland, and northern Scandinavia. Luckily, visitors can experience the greens and reds of the northern lights from the comfort of luxury spas or secluded cabins at stunning hotels and resorts in each of these remote destinations. Book your stay between September and March to increase your chances of seeing the show.

This resort has three extravagant Aurora Glass Chalets at the Northern Lights Resort and Spa ($800 for three nights) in Canada’s picturesque Yukon River Valley. Each chalet features big ﬂoor-to-ceiling windows to give guests an unbeatable view of the northern sky from the comfort of their queen-size bed. You can also find a spa, an outdoor Jacuzzi, lounge, bar, and dining room just a few steps away.

The Retreat at Blue Lagoon, Iceland

Courtesy of The Retreat at Blue Lagoon Iceland

You’ve heard of the Blue Lagoon, Iceland’s world-famous open-air spa fed by geothermal seawater, but what about the ultra-luxury hotel right next to it? As well as offering easy access to the Blue Lagoon itself, The Retreat (suites from $1,344) has a rooftop viewing deck for watching the northern lights. Even though it’s busy by day, at night it’s a private inlet of a super-dark UNESCO Global Geopark on Iceland’s Reykjanes Peninsula, perfect for viewing the aurora.

These cabins are located near Selfoss on Iceland’s ‘Golden Circle’ of tourist sites (which includes the Þingvellir National Park, Gullfoss waterfall, and the Great Geysir), but miles from any roads. With no light pollution to obstruct the experience, the Torfhus Retreat ($1,185 per person for three nights) is the perfect place to view the northern lights. Each residence comes complete with private, open-air, geo-thermally heated basalt stone pools, perfect for relaxing while watching the aurora ebb and flow across the sky.

If you’re more into authenticity than luxury, consider spending a few days in a Norwegian rorbu resort. Eliassen Rorbuer (around $175 per night) is located in the remote Lofoten Islands, and it offers guests the opportunity to stay in renovated cabins once inhabited by Norwegian fishermen. The upscale, restored cabins in the tiny village of Hamnøy attract specialist photographers wanting to capture the northern lights over the water and mountains. You can even take a tour focusing on northern lights photography, or check out one of the outdoor activities on offer!

Seeing the northern lights requires a lot of dedication and time spent outside in freezing cold temperatures unless you happen to get a room at this hotel. At the Arctic TreeHouse Hotel (from around $258 per night) in Rovaniemi in Finnish Lapland, each treehouse suite has a panoramic window offering views of the skies so you can enjoy the frequent displays of the aurora borealis from your own room. They even have underfloor heating and specifically positioned beds so you can stay cozy while you wait to see the lights. It sure beats standing outside in the snow.

Want to enjoy some boundary-pushing architecture with your aurora? The unique Arctic Bath looks like something out of Game of Thrones, but it is actually a floating eco-spa retreat ideally positioned to see the northern lights. Up near Bodträskfors in Swedish Lapland, the Arctic Bath is a nest-like structure housing a luxurious spa featuring Nordic saunas. The Arctic Bath can be visited as part of the six-day Arctic Bath Luxury Adventure package (around $4,598 per person) that also includes the nearby Arctic Retreat.

In the wild remotes of Finnish Lapland, about a two-hour drive from Rovaniemi, is a luxurious log cabin called Lodge L7 (four-night stay from $2,600 per person). Nestled on the shore of Lake Äkäslompolo and close to Pallas-Ylläs National Park, L7 offers everything from gourmet dining to a spa, and it has a large outdoor Jacuzzi for watching the northern lights. There’s even an outdoor fireplace, perfect for warming up after a day out in the cold spent cross country skiing, snowmobiling, or on a husky or reindeer safari.

Situated in the heart of the Lyngen Alps, Lyngen Experience Lodge (around $187 per night) is all about immersion in the Norwegian Arctic wilderness, with dog sledding, snowmobiling, snowshoeing, cross country skiing, and boat safaris along a fjord all on the menu. Set in a secluded grove high above the Lyngen Fjord, its outdoor hot tub has views of the mountains and the aurora borealis. There’s even an in-house photographer to help you capture the celestial spectacle.

Always keep your boots by your bed at Hotel Rangá (suites from around $775). Place a tick beside your room number at reception, and they’ll call you if/when the northern lights come out to play. Lots of hotels promise this, but at Hotel Rangá in Hella in southern Iceland, they actually do it, and at whatever time of night they appear. As well as also hosting one of Iceland’s finest restaurants, outdoor hot tubs, and even its own observatory, Hotel Rangá features some of the country’s most luxurious – and eccentric – hotel rooms. An African safari theme with your aurora, anyone?

Built and rebuilt each year since 1989, Icehotel (from around $250 per night) in Jukkasjärvi, Swedish Lapland, is expertly carved from blocks of pristine ice from the nearby Torne River each winter. The hotel is like a giant, snowy art exhibit, and each suite is created by a different artist. Capture the northern lights during the nighttime photography class or witness the aurora borealis from the snowmobile safari. The hotel can also be visited as part of an 11-night ski tour that takes you to Åre (Scandinavia’s largest resort) and to the Arctic wilderness for some heli-skiing.

Saariselkä in northern Finland is an awesome place to go hunting for the northern lights. Spend your days downhill skiing on the fells and snowshoeing or snowmobiling in the Urho Kekkonen National Park before waiting for the lights to appear that night. The modern four-star Star Arctic Hotel (around $7,715 for seven nights) has Lappish-style suites and Aurora Glass Cabins, where you can admire the northern lights from your bed. The hotel sits atop Kaunispaä fell, and it’s far from any light pollution, so you can maximize your chance at seeing the lights by staying here.

Lots of northern lights trips hit Tromsø in Norway–easily the biggest city in the entire aurora zone–but few get above it. Enter Villa Telegrafbukta (from $12,574 per night per person), a luxury cabin that overlooks Tromsø complete with an ‘aurora bed’ on an open-air balcony with unrestricted views of the night sky, stars, and Northern Lights. Don’t worry about the chilly weather- this bed is kitted out with sheep wool, pillows, and extreme goose-down duvets. Just in case that’s not enough luxury for you, Villa Telegrafbukta also comes with a chauffeur-driven Tesla.

On the northern coast of Norway, about 230 miles north of the Arctic Circle, is the northern lights-hunting paradise of Bjørnfjell Mountain Lodge (cabins from around $488 per night). Nestled in the mountainous Alta, this rustic resort from Original Travel has five secluded luxury cabins each with a fully-equipped kitchen, fireplace, and–most critically of all while stargazing outside in this high Arctic environment–a hot tub for staying warm in the freezing nighttime temperatures. Daytime activities include skiing, tobogganing, and ice fishing.

Although not on the Arctic Circle, the northern lights do sometimes reach as far south as Alberta, Canada, making an appearance at Fairmont Jasper Park Lodge ($399 per night). Situated in Alberta’s magnificent Jasper National Park– the world’s second-largest Dark Sky Preserve–this luxury mountain resort on the shores of the Lake Beauvert is a paradise for stargazers and amateur astronomers, and it’s ideally placed for the annual Jasper Dark Sky Festival (in October of each year), which includes a lineup of immersive, inspiring, and educational events.

Inn on the Lake, Yukon, Canada

Courtesy of Inn on the Lake

You could borrow a set of snowshoes and head out into the wilds of the Yukon while you hope for solar activity — or you could stay in your suite and watch from the cozy comfort of your room at the Inn on the Lake in Yukon, Canada. The rustic hotel’s far-flung locale not only offers a chance to see the aurora borealis in action from your bedroom, but also opportunities to take part in classic winter activities like snowmobiling, snowshoeing, tobogganing, and ice fishing.

Situated 150 miles north of the Arctic Circle on the west coast of Greenland, the Hotel Arctic is the world’s northernmost four-star hotel and ground zero for aurora borealis. When you’re not looking at the sky, watch the namesake icebergs (Ilulissat means iceberg in Greenlandic) as they float on Disko Bay while dining at the award-winning Ulo Restaurant. Make the journey between mid-September and mid-April and stay in a room with an extraordinary view of the icebergs.

This rustic, remote hotel is located in Yellowknife, Canada, and accessible only by floatplane (passengers have to sign a waiver before boarding it). But that doesn’t stop avid adventurers, who head to the lodge and log cabins for a chance to spend their nights watching for the Northern Lights and their days enjoying the hotel’s hot tub and viewing deck, as well as the lounge, bar, and library. The spot even offers an Aurora-watch wake-up service, so guests won’t miss a single moment of the light display—or shut-eye. For an even wilder experience, opt to camp out in a heated tent complete with a roaring log fire.